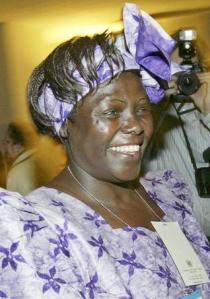 Wangari Maathi died September 25 at the age of 71 of Cancer.

She was born in Nyeri, Kenya in 1940. the first woman to graduate with a Doctorate degree in East or Central Africa to attain a doctorate degree (in veterinary anatomy) and was the first female associate professor and department head at the University of  Nairobi. She has served her country’s parliament, chaired the National Council of Women of Kenya and in 2004 became the first African woman to be honored with the Nobel Peace Prize “for her contribution to sustainable development, democracy and peace.”  Among her numerous other honors are France’s Legion d’Honneur, Japan’s Cordon of the Order of the Rising Sun, and India’s Indira Gandhi Peace Prize and Jawaharlal Nehru Award.

She achieved amazing things (helping 900,000 women to obtain the opportunity to work and ultimately planting over 30 million trees, to say nothing of the government revenue created by the reforestation and rescue work she advocated) in spite of a government who labeled her Green Belt Network as “subversive” and a husband who felt she was too strong-minded.