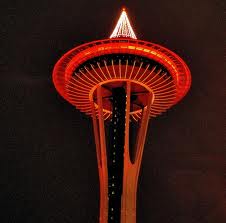 Today, December 1, is World AIDS Day. (Project) RED has announced the goal of zero HIV born children by 2015 through its funding of  organizations like the Global Fund. The Space Needle in Seattle (and Morrison Bridge in Portland) will be the red Pacific Northwest landmarks. There has been so much progress into testing and treatment of the disease since I attended my first World AIDS Day vigil.  I won’t give the year, but things were very different then for the prospects of those with a positive test status. Too many people are being affected by the disease still, especially when they could make better decisions and avoid infection. I really hope that more people are becoming cognizant of the fact that increased treatment options does not excuse such carelessness.