Of the 2009 Forbes list of the 50 most powerful women in business, we are two of the top ten.

Ursula M. Burns, the CEO of the Xerox Corporation, is the first African American woman to head an S&P 100 Company. On September 20, 1958, she was born in New York City. She and her two other siblings grew up in the Baruch Houses (a housing project on the Lower East Side). 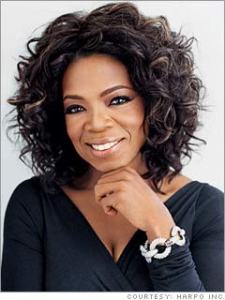 It has been said that the broadcast career of Oprah Gail Winfrey began in Kosciusko, Mississippi, when she began reading aloud and reciting information at the age of 3 under the guidance of her grandmother. At the age of six, she moved to Milwaukee where the effects of abuse and molestation almost landed her in a juvenile detention home. The fact that the facility was overcrowded meant that she would spend the rest of her childhood with her father, Vernon Winfrey and his brand of strict discipline, which helped her turn her life around.

When she was 17, she got her first radio job at WVOL Nashville. After attending Tennessee State University and working in television news positions in Nashville and Baltimore, she was hired as host of AM Chicago, a morning program, which eventually became the Oprah Winfrey Show.

She has received an Academy Award Nomination, received great acclaim (and launched and relaunched several authors’ careers) with her Book Club, and has produced films and television shows through her studio, Harpo Productions. She launched the Oxygen channel in 1998 and in 2008 completed a deal which would provide her with control of a Discovery Network that will become the Oprah Winfrey Network.

Her charity, the Angel Network, has provided aid to those in need around the world and the Oprah Leadership Academy (which is supported by its own foundation) is a school she built in South Africa.