these hips are big hips.

they need space to

they don’t fit into little

these hips have never been enslaved,

they go where they want to go

they do what they want to do.

these hips are mighty hips.

these hips are magic hips.

i have known them

to put a spell on a man and 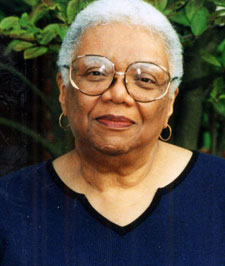 Lucille Clifton (Thelma Lucille Sayles) was born June 27, 1936. Her parents were gifted storytellers. She attended Howard University, but left before earning her degree to begin a writing career. In 1976, the same year Roots was published, Lucille Clifton wrote Generations: A Memoir, which traced five generations of her family through words and photographs. In 1988, she became the first author to have two books of poetry chosen as finalists for the Pulitzer Prize (Good Woman and Next). (Norton Anthology)
*There were several of her poems that I wanted to share (among them, later i’ll say, wishes for sons, and move, but I just felt like I was having an homage to my hips kind of day). 🙂

One thought on “Lucille Clifton”