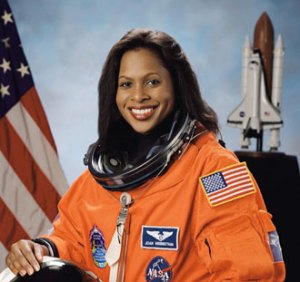 Joan Higginbotham was born in chicago on August 3, 1964 . She obtained Bachelor of Science degree in Electrical Engineering from Southern Illinois University at Carbondale and a  1987   Master of Management degree from Florida Institute.  Her career with NASA began at Kennedy Space Center,  where she was payload electrical engineer in the electrical and telecommunications systems division. She actively participated in 53 space shuttle launches during her nine year tenure at kennedy space center. She logged over 308 hours in space,  having completed her first mission with the crew of STS-116 where her primary task was to operate the Space Station Remote Manipulator System.  In November 2007, Joan Higginbotham retired from NASA in order to pursue a career in the private sector. (NASA bio)