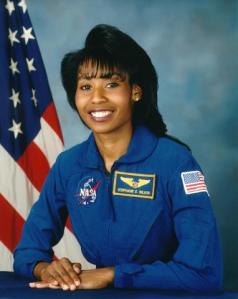 Stephanie Wilson was born in 1966 in Boston, MA. She graduated with her Bachelor of Science in Engineering from Harvard (1988 )  and Master of Science degree in Aerospace Engineering from the University of Texas (1992). Her  graduate research focused on control and modeling of large, flexible space structures.

Selected by NASA in April 1996, when she completed two years of training and evaluation, Stephanie Wilson qualified for flight assignment as mission specialist. She has served in the Astonaut Office CAPCOM branch, working in Mission Control as a prime communicator with on-orbit crews. A veteran of two space flights, Wilson has logged over 28 days in space. She is assigned to the crew of STS-131, targeted for launch in February 2010. (NASA bio)